Custom facebook app for Wasserman Media Group / Boost Mobile. With technology based on Shoutomatic, Boost introduced their new claim “Get Heard” on facebook by giving users the chance to name a historic weekend and win a trip to see Travis compete at the X-Games and drive in a NASCAR race over the same weekend. 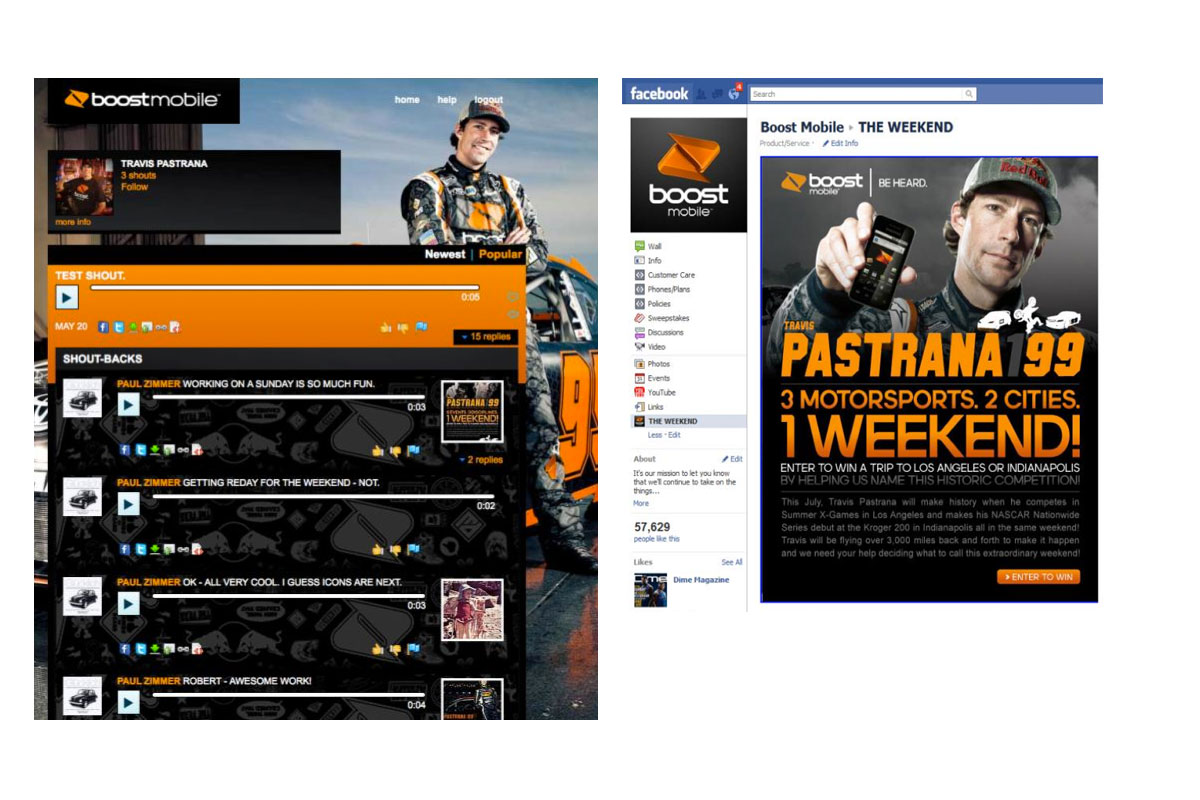 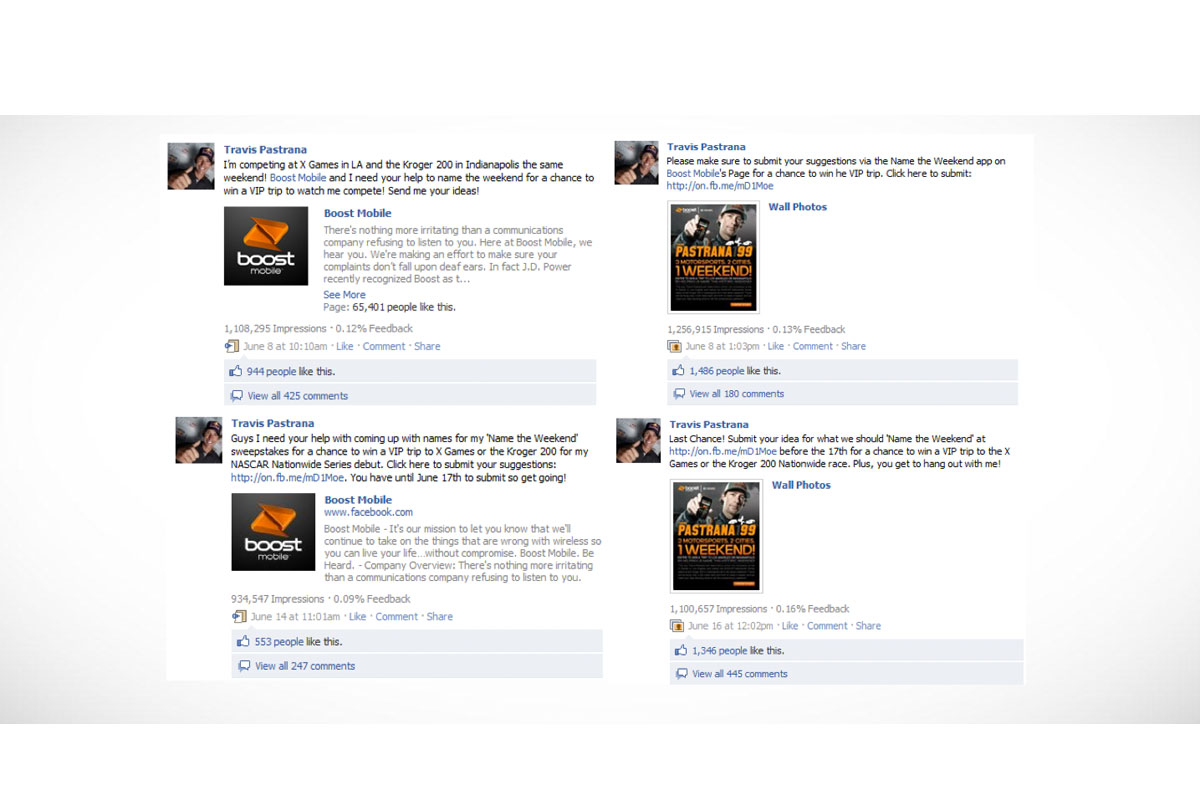 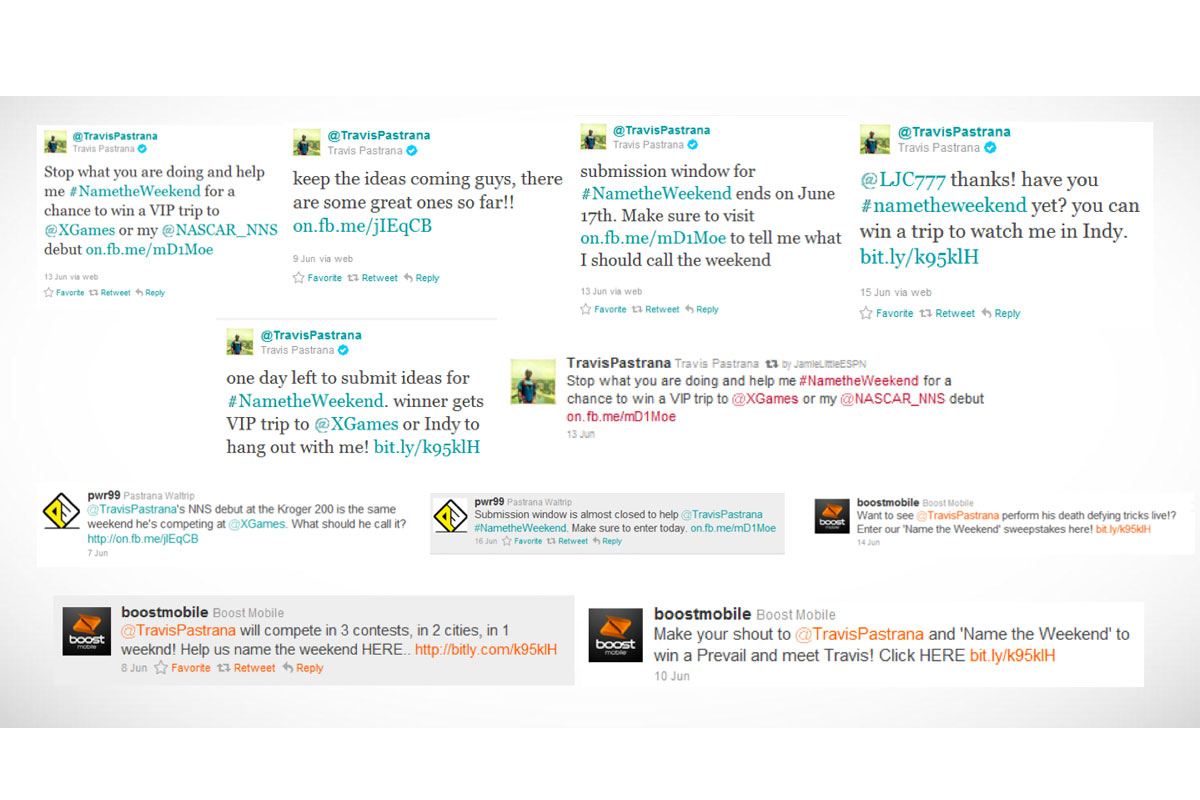 This July, Travis Pastrana will make history when he competes at X Games in Los Angeles and makes his NASCAR Nationwide Series debut at the Kroger 200 in Indianapolis the same weekend!  Boost Mobile and Pastrana are asking fans for their input to help them Name the Weekend for a chance to win a VIP trip to Los Angeles or Indianapolis to see Travis compete first hand.

Travis will be competing in the X Games in Los Angeles on July 28 and July 29.  He will then fly 2,000 miles to Indianapolis to make his NASCAR Nationwide Series debut at the Kroger 200 on Saturday July 30.  The craziness continues as Pastrana will fly back to Los Angeles that night just in time to compete in Rally at the X Games on Sunday July 31!

Fans can submit their suggestions for what to call this extraordinary weekend via a tabbed application hosted on Boost Mobile’s Facebook page (www.facebook.com/boostmobile).  The application is fueled by ShoutOmatic) which allows you to record and broadcast “Audible Voice Status Updates” (Shouts) to your Twitter and Facebook streams.   A full range of social sharing buttons will let fans post their Shouts to their Facebook wall, post to a friend’s wall, post to Twitter, send to a friend via e-mail and download the Shout as an MP3 file.  Click here to be taken to the application: http://on.fb.me/mD1Moe

The Grand Prize winner will receive a VIP trip to Los Angeles or Indianapolis including a personal meet and greet with Pastrana, an Android-powered Samsung Galaxy Prevail, one month of Boost Mobile’s $50 Monthly Unlimited service and an autographed Pastrana shirt.

Fans will be able to submit their Shouts through June 17.  Immediately afterwards, there will be a one (1) week voting window where fans can vote on their favorite Shouts by clicking a Thumbs Up icon.  Boost Mobile and Travis Pastrana will choose the winner from the top three Shouts according to the fans.

PREVIOUSKen Block & Hot Wheels Facebook Campaign
BACK TO ALL PROJECTS